Pupusas, the most popular dish from El Salvador

Pupusas are thick rice or corn flour tortillas, traditionally can be stuffed with loroco (edible flower), cheese, refried beans, chicharron or zucchini squash. However MANY FILLINGS can be accompanied with tomato sauce and curtido: (sauerket) a vegetable made recipe like carrots, jalapeños and cabbage chopped finely everythin fermented with vinegar, salt and pepper to taste.

Those who have tried pupusas, compare then with “Arepas or Mexican Gorditas” which are also made of cornmeal. 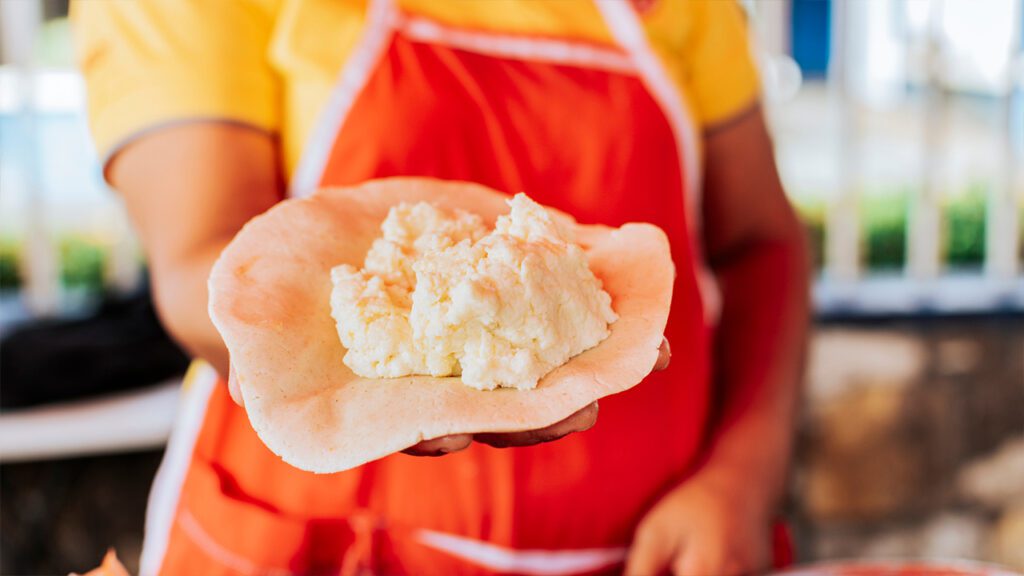 Origins and History of Pupusas

So far it is said that the word pupusa comes from the Nahuatl PUXAHUA or PUXAWA; which means fluffy thing and describes the pupusa very well because when it is cooked it becomes sponge. However, when we look up the word “spongy or inflated” in Pipil, we notice that it is xixikipiltik; which shows us that it is not at all similar to the word pupusa in Nahuatl.

Even a linguistic study in Santo Domingo de Guzmán in Sonsonate (El Salvador) found the word pupusa in the Pipil language; that is, KUKUMUZIN or TIKUKU, both are used to refer to the Salvadoran pupusa. What makes us see that the word pupusa in the Pipil language is totally different from Nahuatl; Therefore, it cannot be guaranteed that the pupusa has a purely Pipil origin. Since his name does not even have reliable etymological bases to ensure it.

On the other hand, it has also been attributed a Maya-quiche origin; where the word pupusa is made up of 2 roots belonging to said language. Which are pop – utz that mean to unite and well, respectively, coming to mean “well united”. If its 2 lids do not join, there is a risk that the filling will spill; that is why it was decided to place this name. Despite all these differences, 3 countries dispute its origin; We are talking about Honduras, El Salvador and Guatemala.

But, because of the great popularity in the population of El Salvador, the Legislative Assembly takes action; and through Decree 655, April 1, 2005 is designated as a typical dish of the country. Said decree legally entering into force on April 20 of the same year.

Among the most recognized types of pupusas that can be found are: 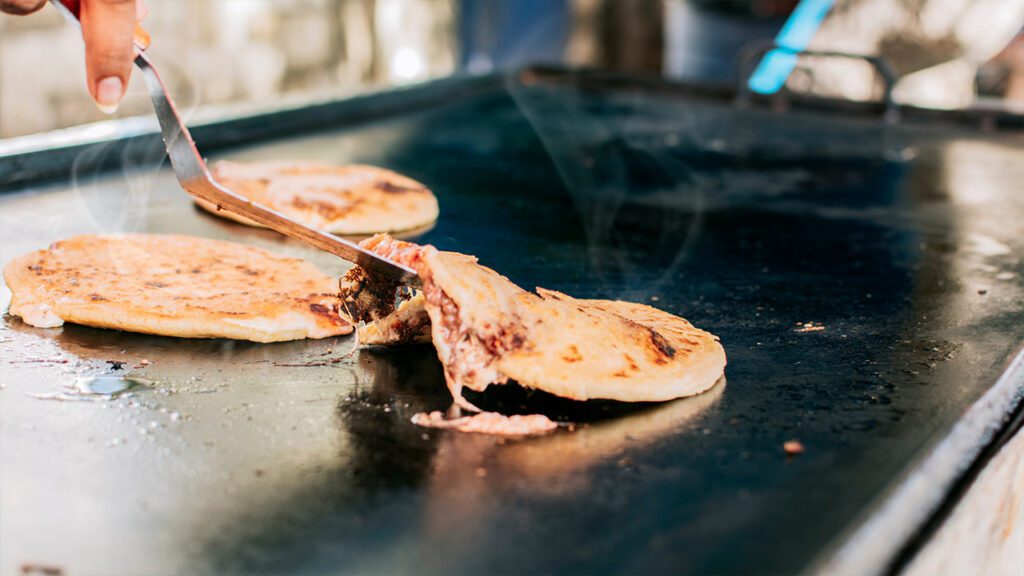 Besides the most popular flavors you can find: 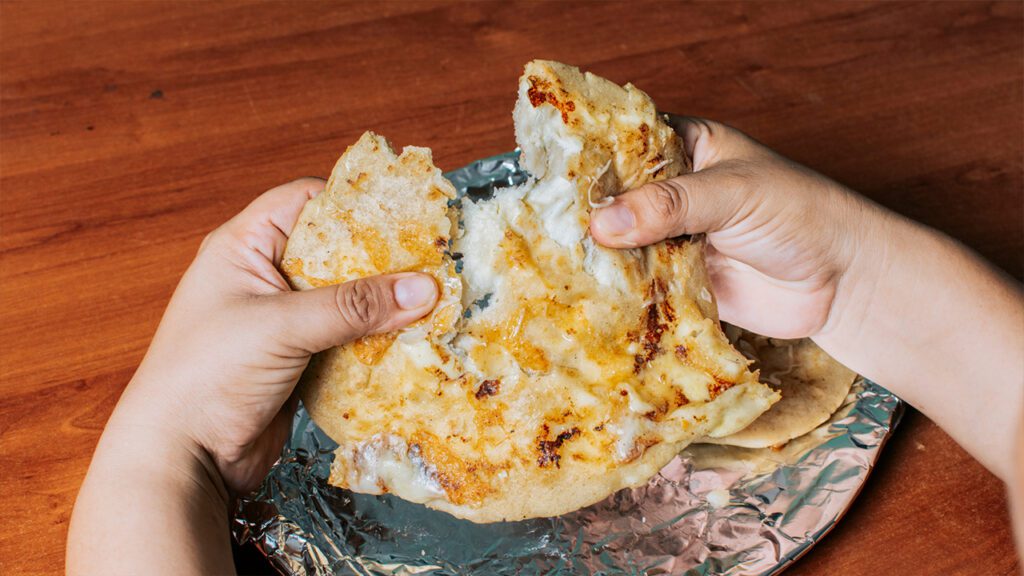 Popular history tells that the rice pupusa originated in the Olocuilta municipality; belonging to the department of La Paz, El Salvador, where it appears for the first time between the 40s and 80s. Due to some kind of shortage of corn in the country, this new variant arises; So far, the National Council for Culture and Art of El Salvador says that its Salvadoran origin cannot be assured. But since they adopted it as typical food and produce it commercially, it automatically comes from El Salvador.

On the other hand, the rice pupusa has gained so much ground that it became a registered trademark; since the National Registration Center (CNR) delivered a certificate to producers and farmers. Which accredits the department of La Paz as one of the first places to produce this type of dish; so that the Ministry of Economy (MINEC) designated Olocuilta as the First Geographical Indication of El Salvador. This regarding the rice pupusa. 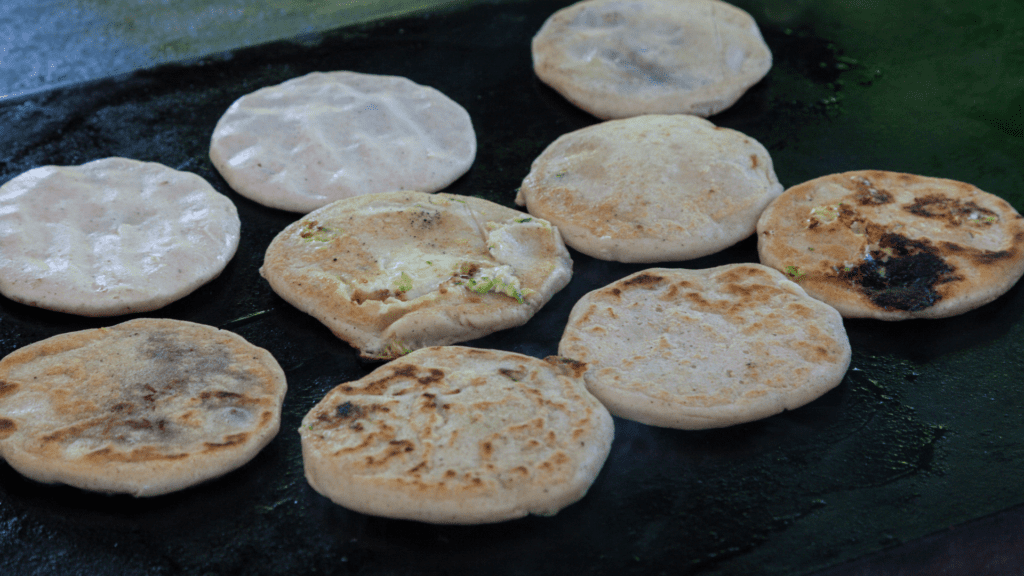 Once the pupusa becomes a popular dish, it is decreed as a typical dish of the country; thanks to Decree No. 655 of the Legislative Assembly of the Republic of El Salvador. This decision not only included a taste for popular gastronomy; but also its contribution at an economic level, since it has been established as a microenterprise. Since there are many families that subsist thanks to its sale; so that in cantons, cities, towns and villages throughout the region there will be a variety of pupuserias: (a type of restaurant where sell pupusas)It is even such a popular dish that several music groups have created songs for it. Where they expose their particularities and characteristics of this delicious dish. And, they exalt popular culture in El Salvador in different parts of the world.

Without a doubt, pupusas are a very unique, delicious typical dish with many options for all tastes in our beloved El Salvador.